Vlogging is taking over YouTube and social media and is proving to be extremely popular, with some vlogging YouTubers uploading daily vlogs and receiving over 10 million subscribers. Vlogging appeals to a wide audience, as many people are interested in watching what other people around the world do in their day to day lives. This also makes vlogging a relatively simple form of video production to produce, as all you need is a camera, a computer and some basic editing software. As Cinephonix have recently released the Creator and Creator Pro music licenses, which are perfect for vloggers, we thought we’d look at five affordable vlogging cameras for you to use to film your own vlogs.

The table below compares the five cameras featured on this list. More information about each camera can be seen later in the blog article. 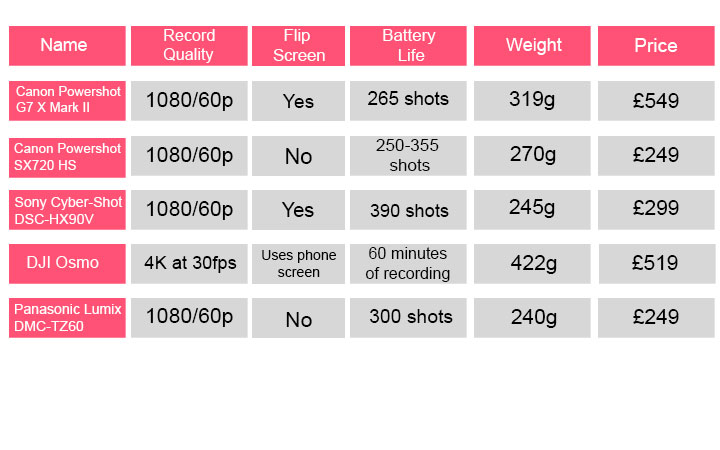 The Canon SX720 is one of the cheapest cameras on this list, however it still boasts some impressive features. It films full HD video at 60p and also has built in Wi-Fi and dynamic NFC, allowing easy image transfers to other devices. The camera’s small design makes it portable, which is ideal for vloggers. One downside of the SX720 is that it does not have a flip screen, which makes it difficult to film yourself.

The G7 Mark II is the big brother of the SX720, and is also the most expensive camera on this list at £549. However, for that price you are paying for a high quality vlogging camera which has a number of impressive features. The camera has built in stabilisation to help reduce shaky footage, a touch screen which also flips to film yourself, touch auto-focus and built in Wi-Fi and NFC. One downside of this pocket camera is that it does not support 4K video recording, despite the hefty price tag.

The Sony DSC-HX90V is an alternative to the Canon SX720. Unlike the Canon, it has a flip screen to help you with your vlogging into the camera, and also films full HD at 60p. It also weighs less than the SX720, so your arm won’t ache as much when vlogging for a long period of time. The Sony has a 30x zoom lens, built in Wi-Fi and NFC and 5 axis image stabilisation to help you capture those smooth shots. The large flip display makes it easy to see what you are filming, however it is not touch screen which might put off some people.

The Lumix TZ60 is the lightest camera on this list, weighing 240g, and its small build means it is very portable. The camera offers full manual control and records 1080 video at 60p. As with the previous cameras, it has built in Wi-Fi and NFC for easy image transfer and the 30x optical zoom allows you to capture high quality close ups. As well as including a 3-inch monitor, the Lumix also has a built-in live view finder, which ensures stable framing and high visibility of live view images even at high magnification and under strong sunlight. The Lumix does not have a flip screen, and the monitor is not touch screen.

The DJI Osmo is unlike any other camera on this list. It looks like a robot arm from the future and is one of the only cameras of its type available on the market. The Osmo has a stabilising gimbal, as seen on the DJI drones, and also has a handle which you hold the camera with. Instead of having a viewfinder, the Osmo has an arm which you can connect your mobile phone to. You can then use the Osmo’s built in Wi-Fi to stream the footage from the lens to your phone. The main attraction of the Osmo is the incredibly smooth footage and the 4K video footage. The Osmo also has a trigger button which can be used to lock the camera at a certain position, or to turn the camera to selfie mode. The main downside of the Osmo is the poor audio quality. To resolve this, you will need to purchase an external microphone. The price tag of £519 and the short battery life are also slightly off putting.

So those are five of the best cameras for vlogging. They each have their pros and cons, so choosing the right camera for you will be based on your own personal preference. It is definitely worth reading some reviews of the different cameras, as well as watching test footage and talking to staff at your local camera supplier before making a purchase.

Don’t forget to check out our Creator and Creator Pro music licences, as they are a perfect way for finding high quality audio to use in your vlogs. You can choose to either purchase a single track under the Creator/Creator Pro license or alternatively you could purchase a Creator Blanket License which gives you unlimited access to our music library and allows you to download as many tracks as you like to use in as many vlogs as you like. To find out more about our Creator Licenses, click the link below.

If you're already a user, click here to log in now. Otherwise, complete the simple form below to register with Cinephonix and take advantage of user playlists and more.

If you know your details you may Log In Now

Save this search for future use. With save search, you can easily share searches with colleagues, as well.

You can copy your selected tracks to an existing playlist folder or create a new one.

Change your playlist title and description. You can also change the playlist status from private to public or vice versa at any time.

Share this playlist with clients and colleagues, even if the playlist is marked as private.

To display an accurate price, please select your usage and currency. Then add tracks to your basket.

Please provide a few brief details below so that we can create your unique customised track.

You may only use this track in accordance with the terms of your Blanket License Terms and Conditions. Please contact us at hello@cinephonix.com if you require a different usage and we can easily and swiftly extend your licence either for your selected tracks or for your entire Blanket Licence.

This track was purchased on under our agreement

You may only use this music track under the terms of the Creator license agreement that you have purchased. Please contact us if you would like to extend the terms of your license or use the music track for another purpose.

By downloading this track you confirm your agreement to the Try Before you Buy Terms and Conditions which can be found on the Cinephonix website.

Your account setting doesn't allow you to download stems and loops, please get in touch with the Cinephonix team to purchase stem/loop files.

Your bulk download request has been confirmed and our servers are busy compiling your tracks and zipping them up ready for download. You'll shortly receive an email containing a link to download your tracks.

Are you sure you want to delete the playlist folder? This action cannot be reversed.

You are deleting tracks from the playlist folder . Once confirmed, this action cannot be reversed. If you are sure you have chosen the tracks you wish to remove and are certain that you want to delete them from this list, click below to proceed. Otherwise, click cancel or close this modal window to leave the tracks unchanged.

With our Try Before You Buy account, you can:

As a current Cinephonix client, you may contact us for a Try Before You Buy account. Try Before You Buy lets you download as much music as you like, with no obligation to purchase. Try out different tracks and synchronise with your production. Make your final track selection and only pay for the tracks you decide to use. No beeps, no annoying voice-over saying "copyright Cinephonix". Simply download and audition broadcast quality music tracks.

Contact Us today for your Try Before You Buy upgrade.

Oops! You can't download this track at the moment. It looks you're on a Cinephonix Try Before Buy account - this means you can download Cinephonix tracks to trial in your productions. Delicious tracks aren't included in your current agreement. Contact us if you'd like to discuss upgrading your account to include Delicious tracks.

Contact Us today for your Try Before You Buy upgrade.

With our Try Before You Buy account, you can download as much music as you like, with no obligation to purchase. Try out different tracks and synchronise with your production. Make your final track selection and only pay for the tracks you decide to use. No beeps, no annoying voice-over saying "copyright Cinephonix". Simply download and audition broadcast quality music tracks.

Please complete your details below and we will be in touch to provide you with your stem pack.

This track is available for licensing but we require your production details first before we can confirm your license. Please complete the details below and we will be in touch to discuss your license.

You've hit the monthly download cap for your plan.

But don't worry! With Flexi-Plan you can pay just more and you'll get unlimited downloads for the rest of the month.

Remember, we never lock you into higher prices.

So next month you'll automatically drop down again to your normal low subscription price.

Price excludes VAT. Where applicable VAT will be charged.